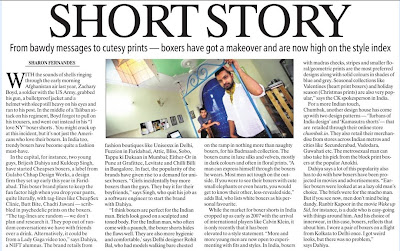 WITH the sounds of shells ringing through the early morning Afghanistan air last year, Zachary Boyd, a soldier with the US Army, grabbed his gun, a bulletproof jacket and a helmet with sleep still heavy on his eyes and ran to his post. In the middle of a Ta liban attack on his regiment, Boyd forgot to pull on his trousers, and went out instead in his “I love NY” boxer shorts . Yo u might crack up at this incident, but it’s not just the Americans who love their boxers. In India too, trendy boxers have become quite a fashion must-have.
In the capital, for instance, two young guys, Brijesh Dahiya and Kuldeep Singh, have started Cheapsex boxers, a label from Gulabo Chhap Design Works, a design firm they set up early this year in Faridabad. This boxer brand plans to keep the fun factor high when you drop your pants, quite literally, with tag-lines like CheapSex Clinic, Butt Bite, Chadti Jawani — scribbled in psychedelic prints on the boxers.

“The tag-lines are random — we don’t plan and research it. They pop out of random conversations we have with friends over a drink. Alternatively, it could be from a Lady Gaga video too,” says Dahiya, a NIFT alumnus. The brand retails from

fashion boutiques like Unisexxx in Delhi, Fuzzion in Faridabad, Attic, Bliss, Sobo, Tappu ki Dukaan in Mumbai; Either-Or in Pune at Grafittee, Levitate and Chilli Billi in Bangalore. In fact, the popularity of the brands have given rise to a demand for unisex boxers. "Girls incidentally buy more boxers than the guys. They buy it for their boyfriends," says Singh, who quit his job as a software engineer to start the brand with Dahiya.
"I think boxers are perfect for the Indian man. Briefs look good on a sculpted and toned body. For the Indian man, who often come with a paunch, the boxer shorts hides the flaws well. They are also more hygienic and comfortable,' says Delhi designer Rohit Bal, who had models walking bare chested on the ramp in nothing more than naughty boxers, for his Badmaash collection. The boxers came in luxe silks and velvets, mostly in dark colours and often in floral prints. “A man can express himself through the boxers he wears. Most men act tough on the outside. If you were to see their boxers with cute small elephants or even hearts, you would get to know their other, less-revealed side,” adds Bal, who lists white boxers as his personal favourite.

While the market for boxer shorts in India cropped up as early as 2007 with the arrival of international players like Calvin Klein, it is only recently that it has been elevated to a style statement. “More and more young men are now open to experimenting with fits and styles. In India, boxers

with madras checks, stripes and smaller floral/geometric prints are the most preferred designs along with solid colours in shades of blue and grey. Seasonal collections like Va lentines (heart print boxers) and holiday season (Christmas prints) are also very popular,” says the CK spokesperson in India.
For a more Indian touch, Chumbak, another design house has come up with two design patterns — ‘Turbans of India design’ and ‘Kamasutra shorts’— that are retailed through their online store chumbak.in. They also retail their merchandise from stores across Indian metros and cities like Secunderabad, Va dodara, Guwahati etc. The metrosexual man can also take his pick from the block print boxers at the popular Anokhi.

Dahiya says a lot of this popularity also has to do with how boxers have been projected in movies and advertisements. “Earlier boxers were looked at as a lazy old man’s choice. The briefs were for the macho man.

But if you see now, men don’t mind being dandy. Ranbir Kapoor in the movie Wake up Sid, for instance, is a dude who is easy-going with things around him. And his choice of innerwear, in this case, boxers, reflects that about him. I wore a pair of boxers on a flight from Kolkata to Delhi once. I got weird looks, but there was no problem,” says Dahiya.